Posted by Sara Posted on 16/10/2017 Categories: Interesting Places, Student Experiences No comments yet 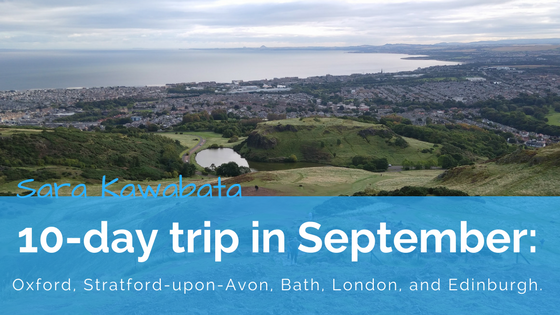 Hello again!!!! The MA Course has begun and I have lots to read now…but never mind!

Today I’d like to talk about my 10-day trip in September: Oxford, Stratford-upon-Avon, Bath, London, and Edinburgh. I chose to go to every place by coach, which is cheaper (of course longer though) than other public transportations, especially because I have a young coach card.

The first night was at YHA in Oxford, which I strongly recommend if you look for a cheap accommodation in Oxford because it is very clean and the staff is very hospitable. Luckily, I made friends with a Japanese lady working in Cambridge, so I will definitely visit her in the future trip.

After Oxford, I visited Shakespeare’s birthplace and his tomb in Stratford-upon-Avon, The Roman Baths, the gardens, and The Jane Austen Centre (I bought the “I love Darcy” sticker!) in Bath, and watched my favourite musical Le miserable in London (Of course I went to Japan Centre again). All of them were great, but I like Edinburgh the best. The city of Edinburgh was very beautiful, historical but also you can see the wonderful scenery of mountains and the sea. I went up the hill called Arthur’s seat, which is very close to the city centre, but you can feel the magnificence of the nature in Scotland. On the top of the hill, I spent more than 30 minutes just seeing the scenery. It was a wonderful and beautiful time. I didn’t have time this time, but I’d like to go up to the north of Scotland next time, and hopefully to see Nessie!! Also, in Edinburgh I tried the full breakfast for the first time in my life. It was larger and meatier than I expected, but it was tasty. I heard that it was a little different from that in England, so I will try it in Canterbury as well!!! 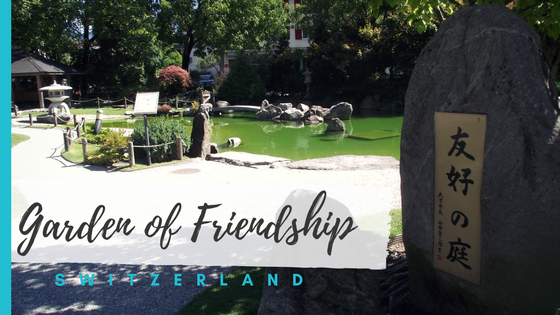 Japanese Garden of Friendship in Switzerland